At the beginning of the year I thought I would try to get a sweater done every month. So I finished a wonderful wallaby for Hannah in January. And in February a simplest sweater got done. I almost completed leahs lovely cardigan (shown below) in March but missed it by two days. So that's April and there is no March. May and June saw a hiatus on the sweater knitting front as well since there were oodles of request for objects other than sweaters. Then there is July's project: another simplest-sweater. August and September saw a lot of socks instead since all the sisters got socks this year for birthdays and that's just where the birthdays fall. October was a sweet little cardigan for Camillia - daisy chain. And November was a central park hoodie.That one had been in hibernation for a long time with only part of a sleeve done but I'm glad I got it out and finished it. In December I mustered the energy to finish this little baby pullover. It's okay but I really don't like how the yarn pooled.
Now that it's December I realize that I needlessly put myself under pressure. I don't need pressure. Thank you very much. I've had enough of it. So much so that I now roll with the days and just make sure I get in a little knitting. After all, it really is therapy so why would I make it discipline? 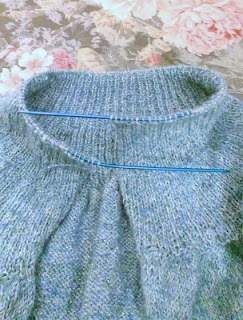 At the neck and close to the end!

There's only one problem and I'm not sure I really want to tackle it. I made the body too long and am thinking about making it shorter. That's not as easy as it sounds since it entails taking off the button bands and unraveling about two or three inches from the bottom of the sweater and then reapplying (and re-knitting!) the button bands. See, not all projects work out as projected. Pardon. 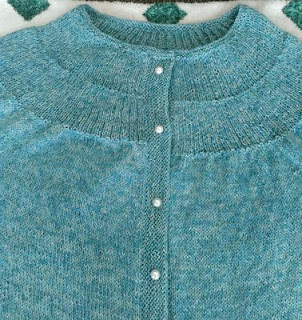 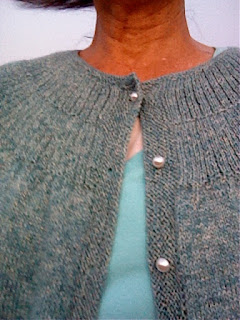 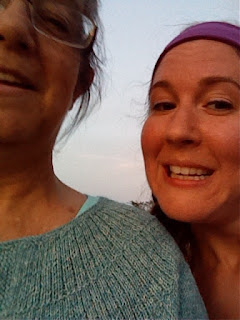 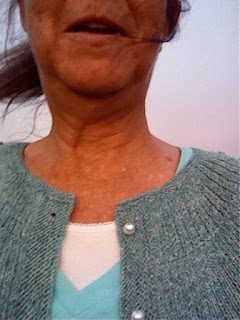 Posted by knitterykate at 11:00 AM