You Can Pass Me the Checkbook 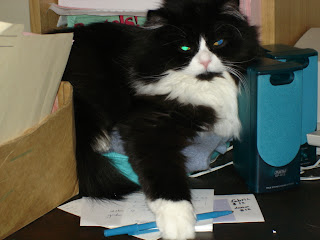 This has been a very eventful day and it's only 11:30. Mum called this AM. Aunt Ruth had passed away. Go here for a piece on her life. It's a very nice tribute to a wonderful woman.

While I was searching for my dental office's phone number, they called. I told them to cancel tomorrow's appointment. I'm too busy--but I said there was a death in the family. We have our web designer coming tomorrow any way and I wanted to get out of going to this dental office. They were/have been really pushy. And I don't like to be pushed around.

I'm planning on leaving in about 20 minutes to pick up Teege at the airport. He said he gets in "around one". So that's when I plan on being there. "Around one". (It's an hour away.)

We've had customers in this AM and they take up so much time and space.

We've had several long distance phone calls--nothing to do with Aunt Ruth. One was a suggestion about pricing in our catalogue $US vs. $CND. Another was a question for B. The other was about a fax machine that doesn't work properly. And B and I are trying to get an order together for Aristo.

Meanwhile, I'm trying to fill some internet orders for CTP (or at least, write them up), fax Jailgy a pattern for an afghan that she asked for, work on Da's pamphlet and one for B as well (formatting). Whew!

I usually make lists of "Things to do Today". This is my list.
Posted by knitterykate at 11:40 AM

I think I'd pass that cat anything if he gave me that look.

Hope things smooth out for you and you find some time for some relaxing (not while driving) knitting!

Check out the photo of Tom on Anna's blog! Sure looks like he's having a total blast.