When we woke up yesterday there was at least 8 inches of snow on the ground. Unusual for March 1. None was predicted. In fact our usually accurate weatherman said it was going to rain. I suppose it did in some parts of the lower mainland but I don't think anyone got snow like we did. Even friends who live just two miles away didn't get any. 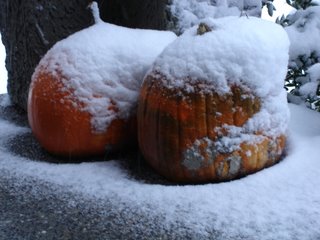 The snow reminds me of the first time I remember visiting my grandparents in Pennsylvania. While there the snow fell. So much fell that they closed the schools. An unheard of event where I had come from in Hawaii. It was the first time I ever saw snow. I was seven and had only experienced walking barefoot in the warm rain. I thought snow was the most beautiful thing I had ever seen. Of course, it was novel. I had lived in Hawaii since I was a year old. But the memories that snow evokes now, bring back thoughts of that trip to PA and all it entailed: Gramma's house with its clanging radiators that gave off absolutely no heat (or so we thought until we stepped outside), Grampa's outside fire pit where he burned the weekly garbage; the hot sweet tea served after supper that was mostly milk and sugar; getting a spoon from the glass spoon holder Gramma kept in her corner cupboard; lemon candies that were super sour in the middle that Gramma kept on her entry table; my first sight of chickadees (now my favorite bird); jenny and jack wrens feeding from the bird feeders set up out side the kitchen window just for our enjoyment; feeding squirrels on the enormous front porch; watching Grampa call to the neighbor kids (from that same front porch) who had no mittens and then having them pick a pair that Gramma had knitted just for that reason; Gramma's "never spent a dime" jar where she saved and banked every dime; red boots and a red toy chest on the back porch; never realizing that the red toy chest was just for us kids (I thought it was only for the good kids); the dime cemented in the steps off the back porch just for fools to bend down to try to pick up; and making snow angels for the very first time.
Reading all the above makes me realize the tremendous influence my grandmother had on my life. I loved her dearly and even today she affects me. I still love snow and enjoy its silent falling. I suppose it reminds me of childhood innocence and carefree days.
Although I can't say, "I never spent a dime," I collect them just as she did in a tall glass vase and then take them to the bank rolled, and deposit them in my account.
I'm still searching for those lemon candies that are sour in the middle and sweet on the outside. Just two days ago I bought two different varieties hoping again that they were the ones. (They weren't.) 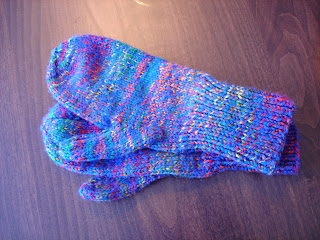 I knit and knit constantly. Although I haven't knit mittens in awhile (see KJ's blog for the last pair) I sit in the passenger seat of the car and pass the time knitting, just as Gramma did, on long trips.

I had Mom get me some spoon holders just like Gramma's and often use them when company comes over and I'm serving buffet style.
But I don't have a dime stuck in the cement in my back porch. I think that was actually Grampa's doings.
Having lived in super humid Hawaii I still remember the blast of cold, crisp, dry air as we walked outside to play in the snow. And inside again to warm ourselves by the scorching warmth of the crackling wood fire. We could hardly stand the static electricity in our hair as we tore off our hats and stomped the snow from our boots. What strange phenomenons flyaway hair and shocks were.
This is actually an old picture of our first snow. The snow disappeared so quickly this time, that I didn't even get a chance to take a picture. These pumpkins have long gone the way of all November pumpkins.
Posted by knitterykate at 8:22 PM

I do believe those spoon holders were Grandma's. Enough of winter. Fruit trees in the neighborhood are blooming, but there is still snow on San Jacinto mountain. Incidentally, Dinah had another stroke.

I remember Summer in Paoli; following the creek upstream to the train trestle and playing on the water sluice. Discovering that the creek had forked on the way home and not knowing which one to take. Sleeping in the attic, bathing in the huge rust stained bathtub, going to ACME for groceries. Picking huge tomatoes, being introduced to tomato worms for the first time, YIKES!

I loved this post. You have a lot of great memories and I love it when you share them.