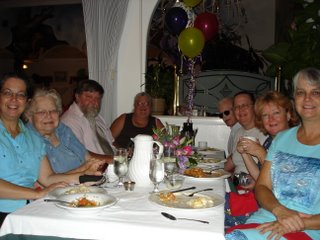 To continue... As we were waiting in the parking lot next door we spied Jailgy and Da who drove up beside us. Mom and Kedj arrived soon after but parked in Datillo's parking lot where they would not be able to see us. I think Mom thought something was up, but certainly not to the extent that we had planned, because she told us later she scanned the parking lot in her immediate surroundings for familiar cars. I really don't think she was expecting either Babbyboebee or me. She was just looking for her local off-spring. 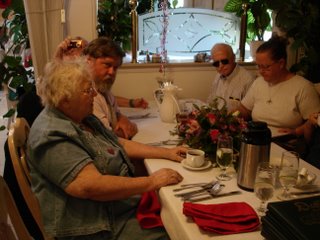 I hope it was not too much of a shock for her. We did space out our arrivals so that we would not all surprise her at once. Maybe that's too mean too. One shock after another.

Jailgy and Da came first and told Gramma that they wanted to join them and make it a party. Soup walked in next and then Chuggy with all the gifts. 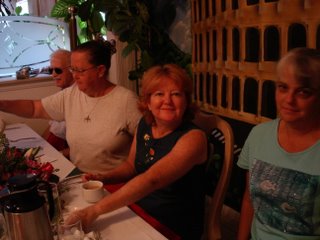 r" (Babbyboebee) came next and try to refill Mom's water glass, much to her chagrin. Apparently her double take was priceless. When I put my arm around her a few minutes later she was truly surprise that I was not actually experiencing damp Vancouver weather as she was led to believe by our phone conversation. I know that she was really surprised because she was actually shaking and started (continued?) to cry. 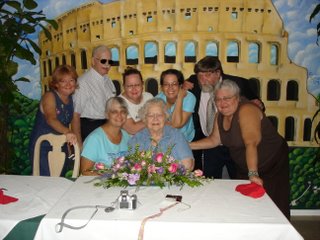 I haven't had so much fun planning and executing a surprise in such a long time. It was so much fun that I would do it again. Now let's see. Whose birthday is next?
Posted by knitterykate at 2:08 PM

Happy Birthday Gramma!!! Good thing you didn't get a heartattack from the shock!! ^_^