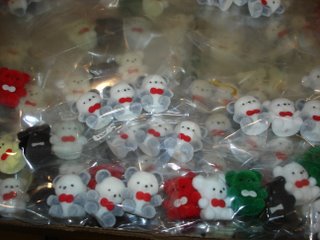 I've been demoted. The on-line catalogue was taking me too much time so B told LK to take over. Secretly, I'm very glad. It was getting to me. I needed large blocks of time which is one thing that I never have. My kind of tasks are those that take minutes or ones that can be picked up and put down with a minute (or second) of notice.That's one reason I enjoy knitting so much. You can do row after row after row or you can do one stitch only before putting it down. And you don't lose your place (unless you have a complicated pattern). 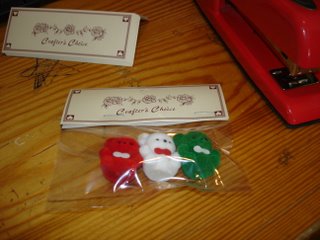 There are some other menial tasks I do. I really don't mind because:

(1) It's very easy. (Can you count to 1000?)
(2) I don't get paid so I'm realy under no obligation to get things done. (Although I did promise B that I would give him four hours a day starting at noon, with one break to get LJ from school). So much for not having large blocks of time. They are there, really. 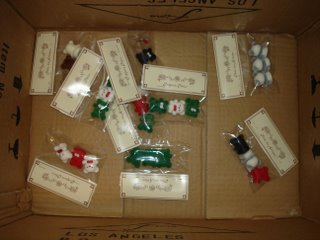 (3) I can stop and start at any time. (Not really. If I keep my part of the bargain which was "I'll work for four hours if I can have till noon free to do the stuff I need to do around the house.") 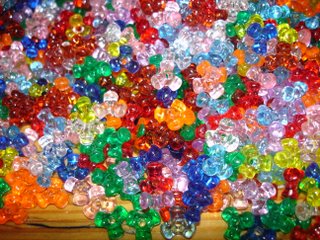 This is a pile of tri-beads that represents two bags of 1000. My job, should I decide to accept it, is to count out those two bags. There are many ways to do this. The first would be to count each and every bead, one by one. That's the long way. The second would be to count out each bag by 5's. Somewhat easier. The third way is to count 1000 by 5's, put it on the balance scale and put the rest on the other half of the scale and see if they come out evenly. If it doesn't you have either too many or not enough beads on the second half, in which case you're out of luck because that's all the beads you were given. 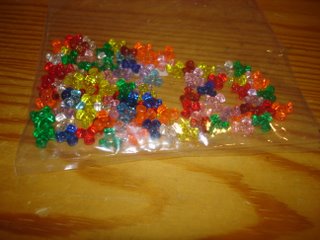 You would never guess that I was a graduate student at one point in my life. But then again, maybe all that univesity prepared me for just this type of work!
Posted by knitterykate at 1:05 PM

What's the url to some of things you are selling... I'm looking for a big red bead I can make into a necklace... Just one bead, maybe glass. Do you sell things like that?

p.s. Good thing I'm not in your family. I can't even count 100 without losing my place. Too distracted.

I'd say weigh them. Would it hurt too much to put an extra bead in to assure that there is at least 1000? Some people will count to make sure they get their money's worth.

Go on ebay to moefe's store. Also check our on-line store web page(that I'm not working on anymore). I'll look around here to see if I can find something...maybe an African bead.

I'd vote for weighing...unless you could find an automatic counter like the ones they use to count coins at the supermarket.