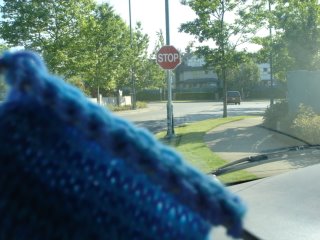 Because I've been told I should change my name or else start blogging about knitting I thought I would rather do the latter. It's just that I didn't want to bore you with pics of yarn, knitting needles and finished projects. It's not as if I haven't been knitting. 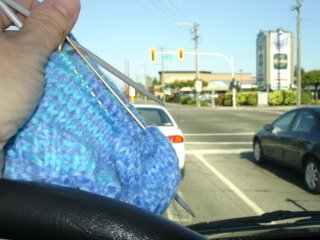 I have and do every chance I get. As a matter of fact, H and I drove to the doctor's this AM and I brought along Jailgy's project (secret) First, I had to figure out where in the project I was and then realized all I had time to do was frog. Hmm. Progress is definitely slow on the home front. All the while wondering if she'll actually like "it". (If not, send "it" back, J!) I really had fun knitting this one. And after she receives the package I will post a pic. (Or let her post one). BTW this is not your project. 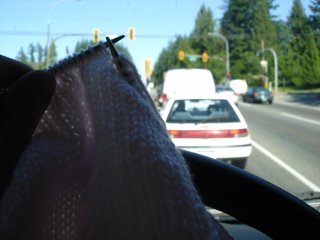 As you can see I knit at stop signs, stop lights and 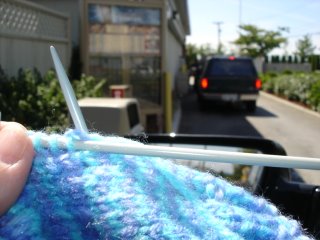 even in line at Tim Horton's. 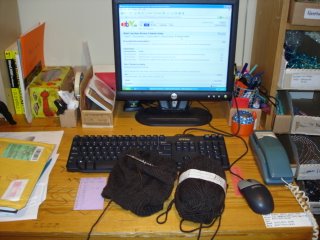 When I can get away with it I knit in front of the computer while working on e-bay stuff. (Our computer can be slow sometimes).

But we have been really busy this summer and, as well, knitting seems to be more of a winter pastime/occupation.

Other knitting news. You'll notice (last blog) that I finished PC's wallaby. That was my goal for the trip to Regina. It turned out just like I was expecting it to. Of course, when you make a baby sweater it's bound to fit in the first year or so as long as you don't make it too small. (They grow, you know). So you don't have to worry about gauge or any such thing. Just as long as the finished fabric feels like I want it to, I'm happy. 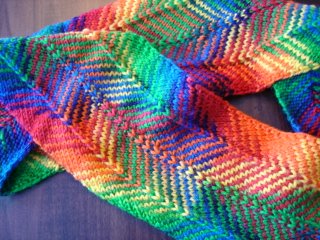 This is a scarf that I was experimenting on. The pattern is a chevron. I really like how the variagated yarn works with this pattern. I'm actually looking for a yarn that is almost solid in colour with just a little contrast color. Someday. I think it would make really pretty socks. 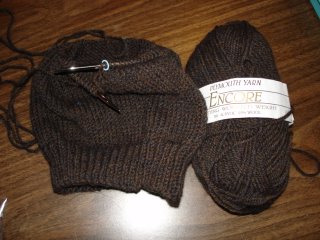 I was able to start the wallaby for Prince D and actually got quite far. It's only a two year old size and should go quickly. The "Mom" picked brown and since I thought plain brown was a little boring I picked this heathery one.

we just celebrated your birthday (shawn's birthday)with breakfast in my park I think everyone had a good time even bobby mom brought fruit and kelbasa beck brought eggs and sweet rolls janet bacon and I made potatoes the only thing missing was your family. Tom likes the idea that you like sudoku puzzels he has written program that make the puzzels sue

Chuggy said she blogged, meaning she posted a comment but I can find it nowhere. Where did you put it?

she never commented here that I know of.