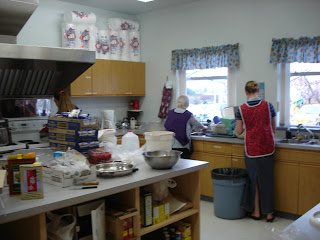 You've probably noticed that all of us Canadian bloggers have not posted for over a week. Our conference is just now over and it's been a really busy week for all of us. I have been so glad that we were able to get it done with no difficulties. Everything came together really, really well. All of us work well together too which makes it a much easier job. There is so much that goes into putting on a conference and I have more appreciation now for others who have invited us to their confences. I hope I never take for granted again all the hours of preparation that it takes to do it. There are so many things to consider. I know that Shadow Hills has a list of things that they go through every year to make sure that every area is covered.. and they keep adding to it. I don't know how many items are on their list but it must be in the hundreds. I was only in on the food part but there's also the sound system, recordings, the baby room, the supplies for the bathrooms, hotel accomodations, ordering of extra chairs and tables. The list goes on and on.
On Tuesday of last week we did major grocery shopping at Costco and Superstore. And then we were in the kitchen on Wednesday cooking up a storm. We got it all done with plenty of time to spare. A break for a lunch of sandwiches from Subway energized us. And then a run to Starbucks by Gran and LeAnne in the afternoon helped to kick us into gear to get our second wind. It was nice to not have to make lunch for ourselves on top of all the cooking we had to do.

On Thursday guests were arriving and we promised them dinner. That and the marinated chicken from Wednesday was the only cooking we did on that day.

Friday morning as soon as we arrived at the meeting room the ovens were turned on and the Timbits were delivered. And we were off.
Posted by knitterykate at 4:53 PM

The little I've heard so far is that the Richmond Gang put on a really invigorating conference, fed your guests well both bodily and spiritually. Maybe something like EmergenC or extra vitamins would help you all with energy.

great slide shows, love all the babies and comments

Thankyou so much for all the work that went into the conference! The meals were delicious and the meetings were great too! Great pictures BTW!