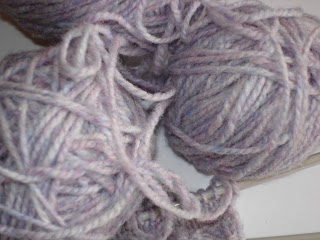 When things get too hectic around here I pick up my knitting needles and just knit. Cast on any old number of stitches and knit til I develop a rhythm that relieves my tensions. Sometimes I'm so tense that my knitting gets tight and I have to concentrate on working a little looser. Usually, noticing the tight stitches is all it takes.
I got this yarn last spring at the open house at the winery. And I've been itchin' to knit with it ever since. It's a sturdy 100% wool, hand spun, hand dyed and 2 ply yarn called "Fundy Fog" that I thought would be too heavy to make socks. 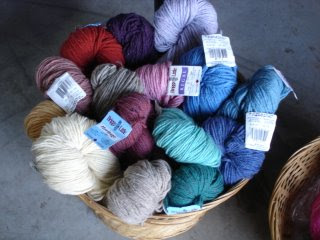 But after knitting my swatch I think that's what it will be.

I took it to meeting last week to unwind the skein--it came in a hank. I had used some scissors to cut off the very sticky tag. Because meeting was starting soon I left my half done skein, the wound up ball and my scissors on the table knowing they would be there when I got back. 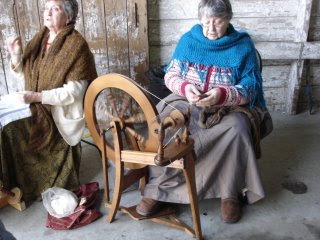 What I didn't know (and really should have remembered, being a mom) is that you don't leave scissors lying around where there are oodles of kids under the age of ten. Well, guess what happened? Yep, that's right. Those scissors proved to be too tempting for some little person and when I came back my yarn had been snipped right in between the skein and the ball! I did want the yarn cut in half eventually but not just yet. 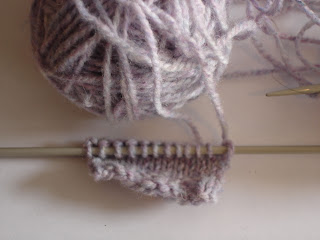 Not until I had divided the yarn exactly in half and weighed each ball on a balance scale so that when I knit the socks I wouldn't knit too much on the first and not enough on the second. Oh, well, I can console myself with the thought that I do know how to add on in the middle of the row and not leave a hole where I switched yarns. And yes, the little one did confess (in a whisper), "I did it."
Posted by knitterykate at 8:27 PM