One Way to Spend A Day 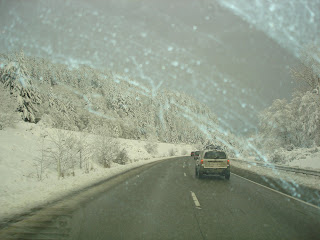 It took us eight and one half hours to make a three hour trip to the SeaTac Airport. The kids' plane landed at 6:30PM--right on time but we were three hours late picking them up! The roads as well as the border were horrendous. Snow and ice and accidents everywhere! And no one knows how to drive in the snow and no one wants to put snow tires on for one mile, take them off for two and put them back on again for five. It was hopeless. Just to get from North Seattle by the 405 interchange to the airport was three hours. The on-ramp alone took us 30 minutes because someone keep slipping and sliding towards a parked bus and thus refused to budge. 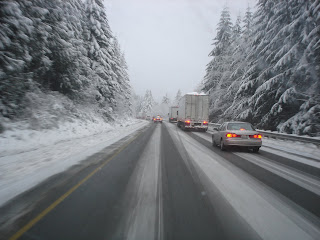 It was a relief to finally pick up the kids. I sure miss them when they are away. We left the airpost at 10:00Pm and got home at 4:15AM--only a little over 6 hours this time. But I would do it again in a heart beat because of who was there.
Posted by knitterykate at 4:28 PM

Scary! I don't envy you your pretty snow.

i wouldn't do it again...next time they can call a cab.