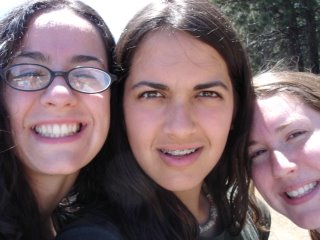 We were encouraged by being in Walla 2. We always are. The brethren there are so kind--Who else would give up their master bedroom, treat you like royalty and then say, "Stay as long as you like". What a temptation! But we needed to move on to Lassen. 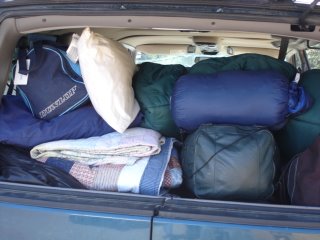 So early on Tuesday we picked up LK and H, stopped at Starbucks where we met E and R from Tacoma--(do you really think we were there only to meet E and R? at Starbucks? before a long trip? early in the morning? You're dreaming!) Next we picked up LJ at S's where they have horses, of course.

It's about a 12-14 hour drive to camp for us and usually we just mosey along. And we did just that. For awhile. Half way there we got a call from E and R on our cell phone. "Umm, we're not behind you anymore." Sure enough, we checked our mirrors and couldn't see them. 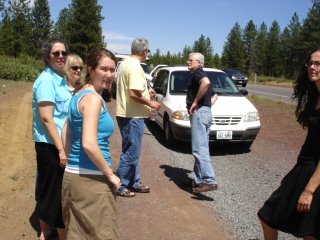 They had pulled over and transmission fluid was leaking all over the ground. It was a good thing we were with them because their car's transmission blew up. 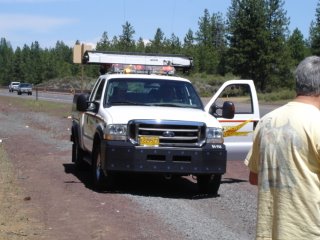 Unbelievably the "Oregon Emergency Response" truck pulled up right away. Because they arrived so quickly someone said, "Ask if they are angels!" After talking with them B and E came back and said, "they're no angels! "We transferred luggage and one girl and, with much urging on their part, left the S's waiting for the tow truck. They got towed seven miles back to Bend and spent the night while we traveled on to Lassen. Thankfully, we met up with them the next day. They had arrived safely.
Posted by knitterykate at 11:16 AM

I was traveling home from Lassen with L.Osborn the time she was moving to SoCal. She had all her worldly goods with her, including her skis on top of her car! We got a flat tire and had to dis-gorge the entire trunk to the side of highway 5. It was amazing how much stuff you could get into a Honda Civic's trunk! P.S. the CB truckers had been commenting on how the blue honda made them nervous...skis in August? Just WHERE was she going?