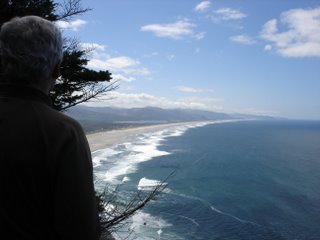 B and I got home early this AM-very early-like 1:30AM. We were half way down the Oregon Coast in Lincoln for a short holiday. Kind of a respite. I'm glad we went because it recharged my batteries. I'm ready to go for the long haul. 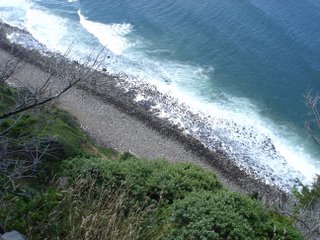 Right now I'm home with LJ who is sick and I'm listening to the afternoon meeting-(which just ended). They're talking about the five kinds of forgiveness. If you want to know more go here: www.recordedministry.com and listen to the July 15, 2006 afternoon meeting. 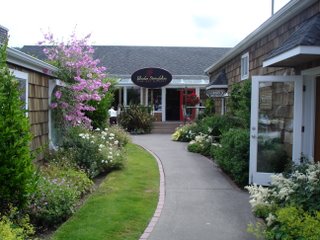 Cannon City was the quaintest town. There were flowers everywhere and lots of places to spend your money. I'm not interested in knic-knacks which is what these stores seem to be full of but let me loose in a yarn shop and there is always something I seem to need! 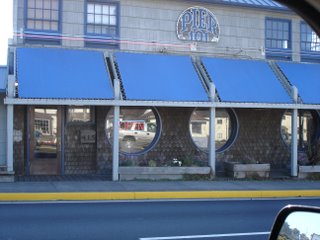 When we were in Lincoln City we ate at the Pier 101. (Highly recommende!) The prime rib was enormous! B said I should have taken a pic of it. It was enough to feed JND his joint for the week. I could not even finish half of mine and still walked away STUFFED. 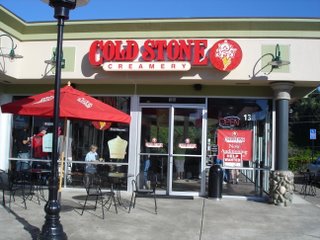 We had talked of going to Cold Stone for dessert but could barely even think about eating any more. We ended up sharing a scoop because we wanted to at least try it. We missed having some in Leavenworth because it was too early in the AM when we stopped there. 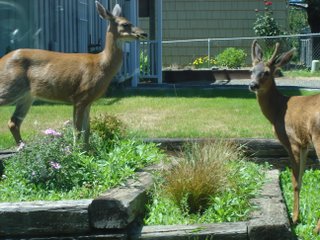 I was to meet B in Oceanside after his bike-ride and on my way there I met these guys! They were actually in someone's front yard enjoying lunch. This was not on a deserted road either. Lots of traffic was going by. They really must be used to people to be able to enjoy the flowers in the garden. Or else they really thought they were tasty and didn't care what people thought.
Posted by knitterykate at 3:32 PM

Wow! How tame is that? I saw some really tame ones at the Deer Park in Nara, Japan once. Came right up to you for food. There was even a public awareness cartoon, (fat, lolling, cross-eyed deer) cautioning folks from over feeding them, at the entrance.

P.S. Jon LaBenne had a life sized chain-saw carved moose in his front yard in Wyoming. He'd put his children on it, pretend to shoot it, lasso it, wrestle it, (NOT AT THE SAME TIME, silly) and generally horse around until a tourist called the Fish & Game Warden and turned him in! Even the Warden was fooled! oops.

I need to go to the coast soon. Those pictures are beautiful. It is so hot here, and we had a monstrous lightning storm last night. I especially liked the pic of Cold Stone.